News from the Sultanate!

2 replies to this topic 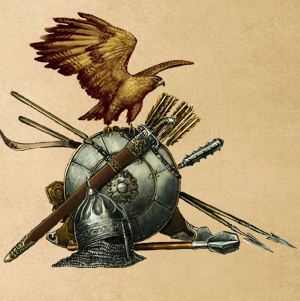 Be advised that Sultan Hakim, bright star and rightful ruler of the Sarranid Sultanate has tired of his useless bot archers and has ordered the Bastards of Durquba, a mercenary archer outfit loyal to the Sultanate to replace them. This group is better trained and has better weapons. One adviser in the Sultans court says that the Bastards are skilled but they cost a lot more then previous archers. He also commented; "These bastards better perform as promised!". Other sources speculates that taxes probably will have to be raised to cover the Bastards salaries.

Yes, the Sarranid archers have finally been upgraded and made fully competitive with all the other ranged units. As some people know, the Sarranid archers had been cursed with 0 in powerdraw while all the other archer nations had 5. This combined with a proficiency accuracy of 80 made them the laughingstock of Calradia. This has now changed, their powerdraw has been altered to 4 and their accuracy has increased to 120. This will make them much more effective in battle while keeping it within the original lore.

This is of course subject to change after observations.

Im so happy for them

I suppose, sarranids now easily beat khergits and nords, but still lose to vaegirs, don't they? And i wonder if any new tactics were invented

It is different. But the Sarranids are stronger overall, especially on medium/small sized maps where they can get into range more quickly. The best part is that the Sarranids can win now without going full cavalry like they were forced to do before.

Sarranid vs Nord is quite even, it really depends on the map now and the players. But yes, the Sarranid will win 6 times out of 10.

Sarranid vs Vaegir, Vaegir still wins 8 times of 10 regardless of map. They simply have much better archers, equal or better riders and better infantry. That Warbow is a killer compared to the nomad bow.

Sarranid vs Khergit, same as before. But the Sars have more options now.

Sarranids vs Swadia, this one is interesting because they are now approximately very similar in strength and doctrine.

Sarranids vs Rhodok, this one is also interesting because while the Sarranids has better cavalry, the Rhodoks have better infantry and overall better ranged option. But the Sarranids new found strength have forced the Rhodok players to become smarter. No longer can they waltz across the field towards the Sarranids main lines and feel safe from archer fire.

Also tagged with one or more of these keywords: Archers, Bastards of Durquba