There are certain props in other servers (particularly a team deathmatch server Umbuz recently saw) which are not in the default props list. Like... there was a huge metal dome in the form of a cage in one of the maps. How is that compatible with native? Where do they get these props?

Are you sure it wasn't one of scene props with big scale ? You can get the map you downloaded from your Documents folder, add it to you'r module and open the map in the editor to see what scene prop is. If a client joins a server with a new scene prop, it crashes because doesn't know that scene prop id.

i also heard about possibility of using more dungeon interior props in native compatible way. it was necessary to edit module text files and switch existing available props to those normaly unavailable props, then mapper could see it in editor, and after that server can use those new-old native props even without changing server files. i tried to search this possibility on net but i wasnt able to find it again. im not 100% sure about this, but i believe it works.

Do you mean replacing existing props ? But you can't add a prop with new textures. Replacing is possible, i did it for the decapitation feature. But i don't think is a good idea for scene props. Replacing a scene prop will affect all maps where you used it.

I followed this tutorial:

I made my model in 3DsMAX with no textures, just to check if it can load my imported prop. This tutorial is for weapons, but for props, as it's mentioned, it's not much different. Unfortunately I got stuck in the system module step.

I also went through almost all the props and couldn't find a metal cage with any scale. But yeah, the replacing idea could make a mess.

Do you mean replacing existing props ?

Not replacing. Those are existing native props, but mapper cannot see them in editor, unless he modify his scening module files. After that, u dont have to edit server files, bcs it is already in those files from basic.

I followed this tutorial:

I made my model in 3DsMAX with no textures, just to check if it can load my imported prop. This tutorial is for weapons, but for props, as it's mentioned, it's not much different. Unfortunately I got stuck in the system module step.

I also went through almost all the props and couldn't find a metal cage with any scale. But yeah, the replacing idea could make a mess.

If you give me a screenshot of that prop i coul understand what prop is.

@Aeneu, i don't understand what do you mean. If the server spawns that prop, all clients without that prop will crash (tested myself).

If you give me a screenshot of that prop i coul understand what prop is.

@Aeneu, i don't understand what do you mean. If the server spawns that prop, all clients without that prop will crash (tested myself).

i say, its all native props. if u played tutorial and singleplayer, u surely saw some interiors that are not contained in editor.

Ah yes, i understand. Yes, if they're already in module scene props, they can be added.

Ah yes, i understand. Yes, if they're already in module scene props, they can be added.

Well, don't wait more!!! please make all those "lost/hidden" objects appears in editor, for we can make new maps

ps: if it's not so much hard job ofc

(I am not sure, this is the right topic. Correct me if I'm wrong.)

Years ago I used to do mapping in Warband and recently I started playing again. Now I'm also interested in starting a new mapping-project. (Mines of Moria, already did one, but it's lost)

Back then I had a problem (and others too): The weather in the orignal Native could not be changed. (Neither via the editor, nor the source code)
Because I wanted my maps do be playable without a mod, I didn't used anything in that way.

So my Question is: How do I do that? Is it possible with NeoGK? Or can you only change it in the server settings?
(Currently I want a dark, nighttime setting on my map, maybe fog).

If you want to make a map for multiplayer, yes neogk can allow you to set different weathers. Otherwise you can only do it modding the source code.

(Currently I want a dark, nighttime setting on my map, maybe fog).

Only a suggestion: for a multiplayer map, is much better set weather like some daylight, because this let that while map is played, admins can change weather to some more dark, fogged, if need, or to make a change for refresh scene, etc...

In otherway, a dark map at begin can't be changed later to some more clear (not easily).

Not saying/forcing to make a day scene, but think on it before

Ok, thanks for the advice. Then I will try first via the server settings

Another question: How do I add a completely new map to my NeoGK-Native?
Years ago I did that with the module system in classic Native, but now I would overwrite every file of NeoGK, wouldn't I?

I guess I need a .sco-file in SceneObj and an entry in scenes. Is that all there is to do?
Wouldn't I also need to determine the map to be a multiplayer siege map, and also the name, etc.?

EDIT: If I understand correctly, the tutorial only shows how to edit/redo a already existing map.

You can delete a sco file of one of neogk maps and use that map to build a new one. Then we'll change the name of map when we add to the server.

Hello, how pass map of the game's mode " Death " to battle?

Hello, how pass map of the game's mode " Death " to battle?

Firstly, put/change the spawns points in separated/opposite places in map,

now map is ready for battle.

This is part question and part summary and it's entirely based on Aeneu's original idea (post #23 and following ones); maybe someone could provide some additional info. As mentioned, there are some props (buildings, interiors, etc) in Warband that every player has in its Warband installation (mostly used in SP) that aren't available in Warband map editor; therefore, cannot be added into the multiplayer maps. For example: 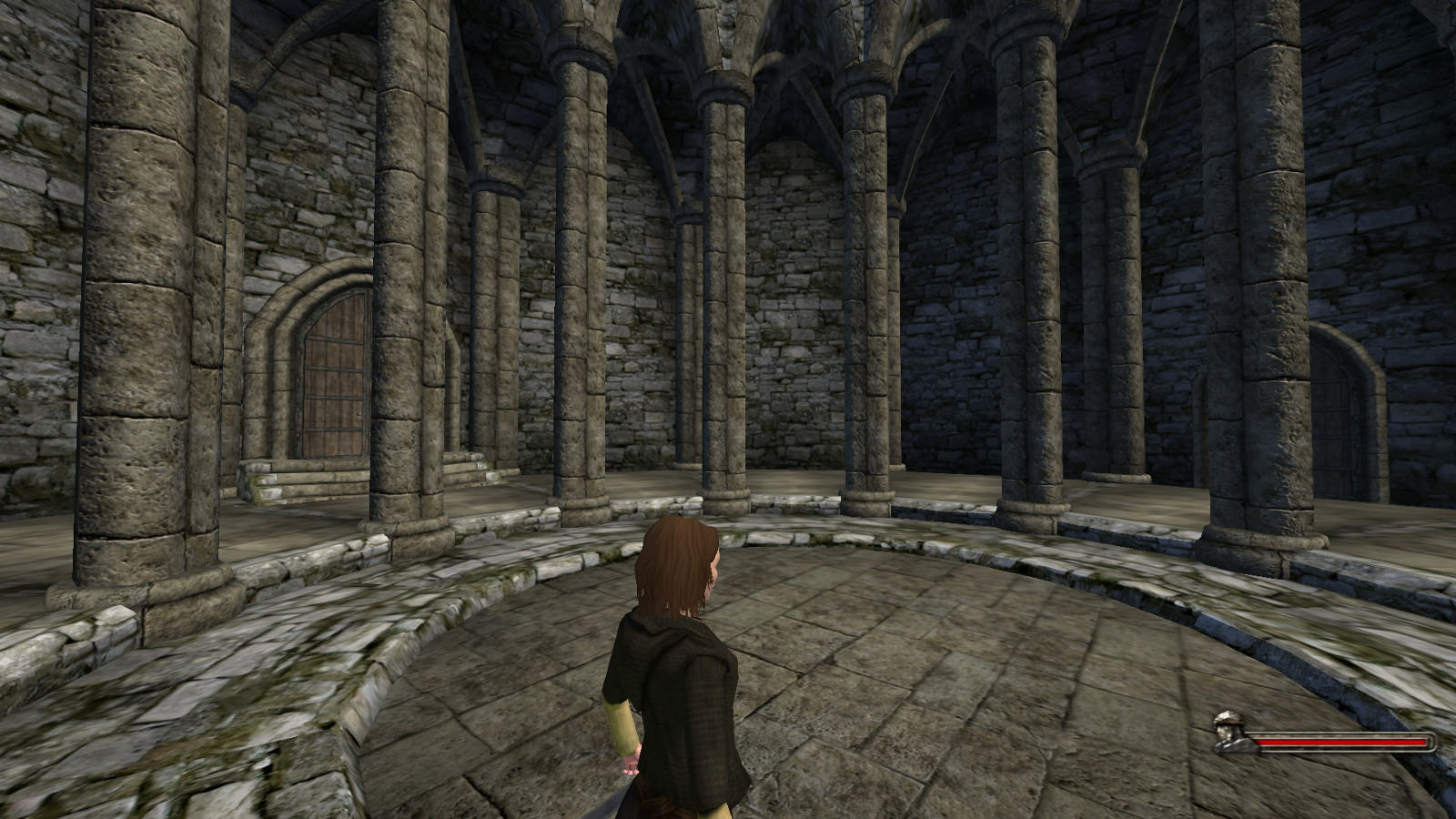 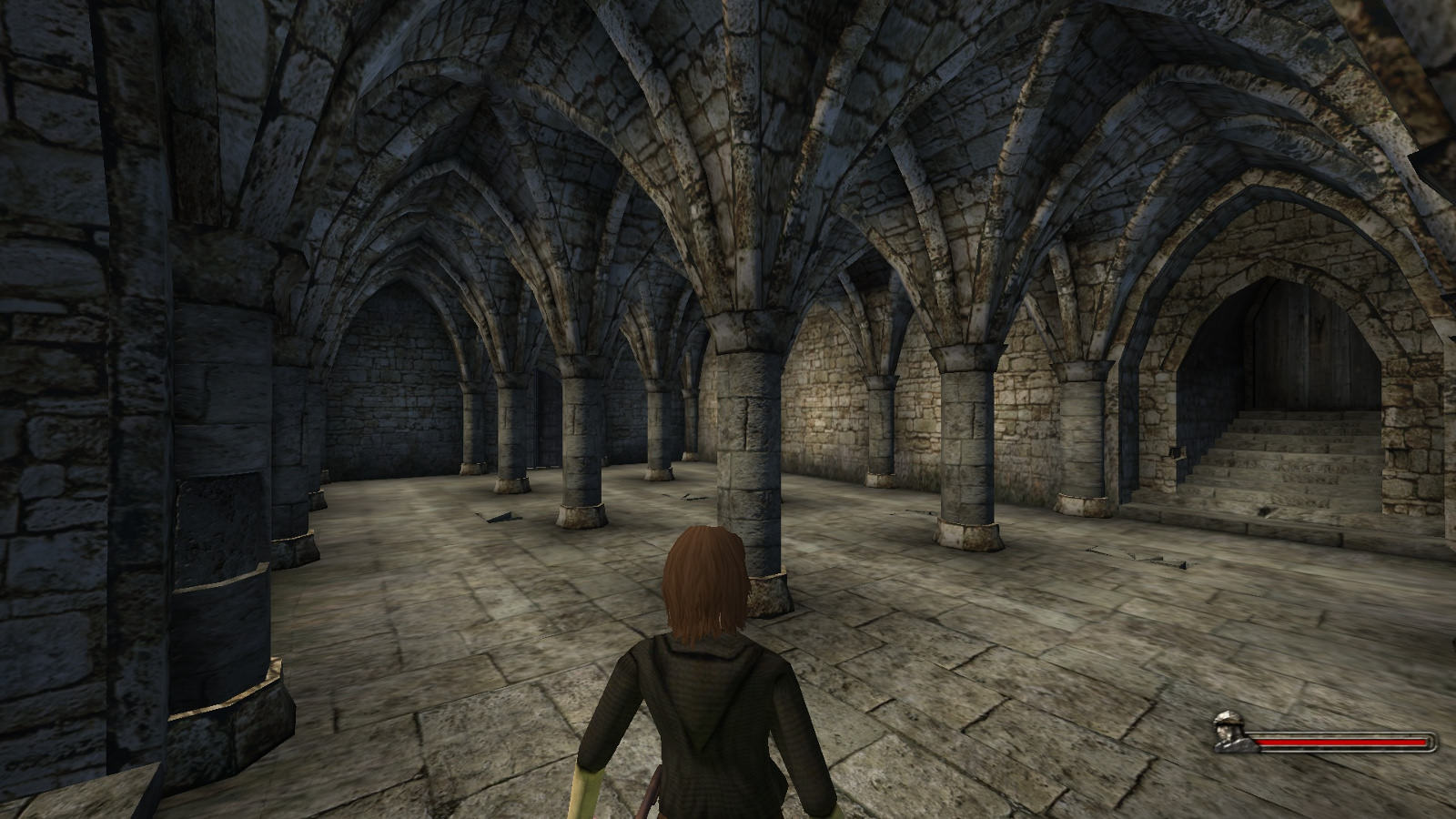 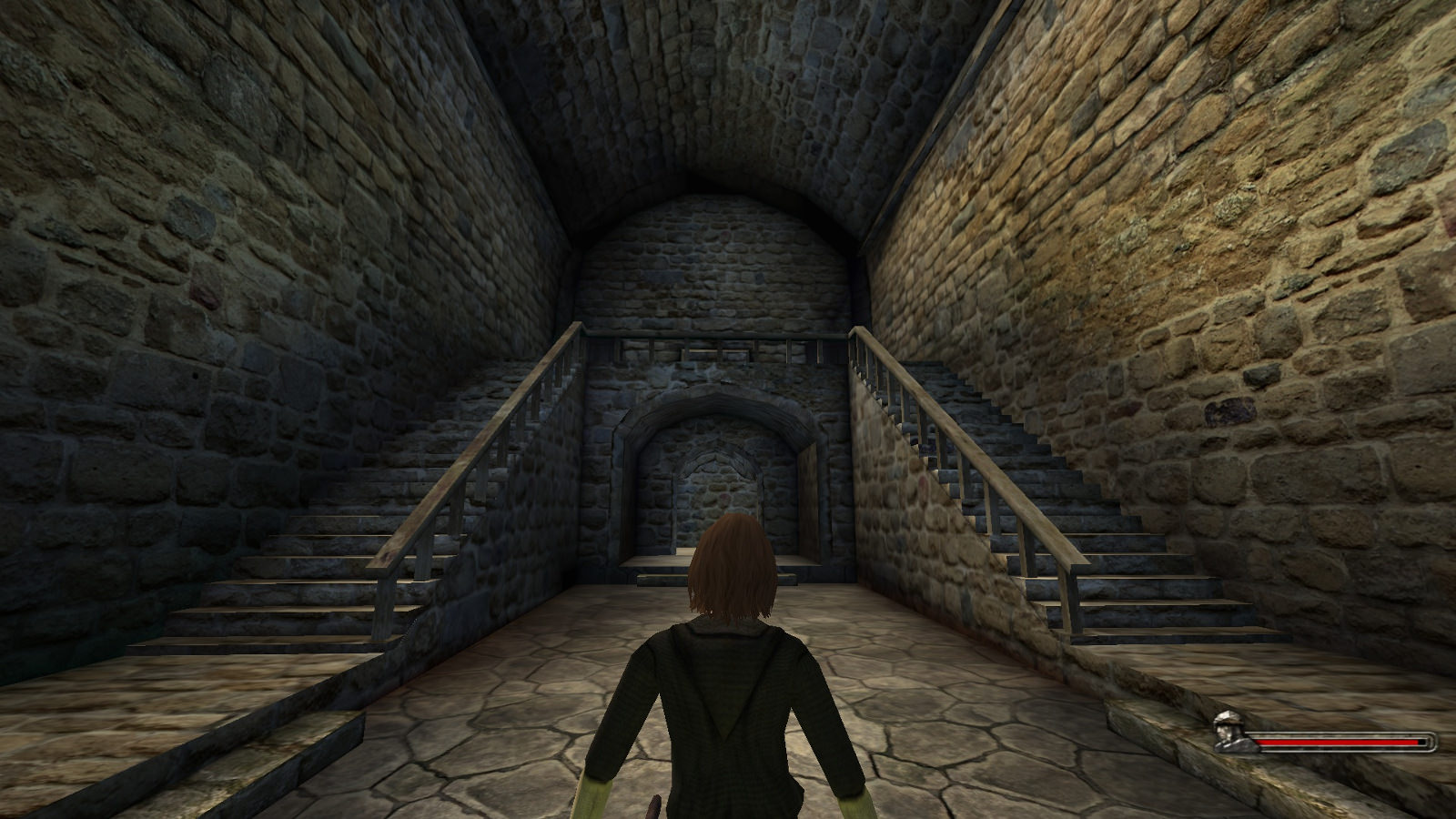 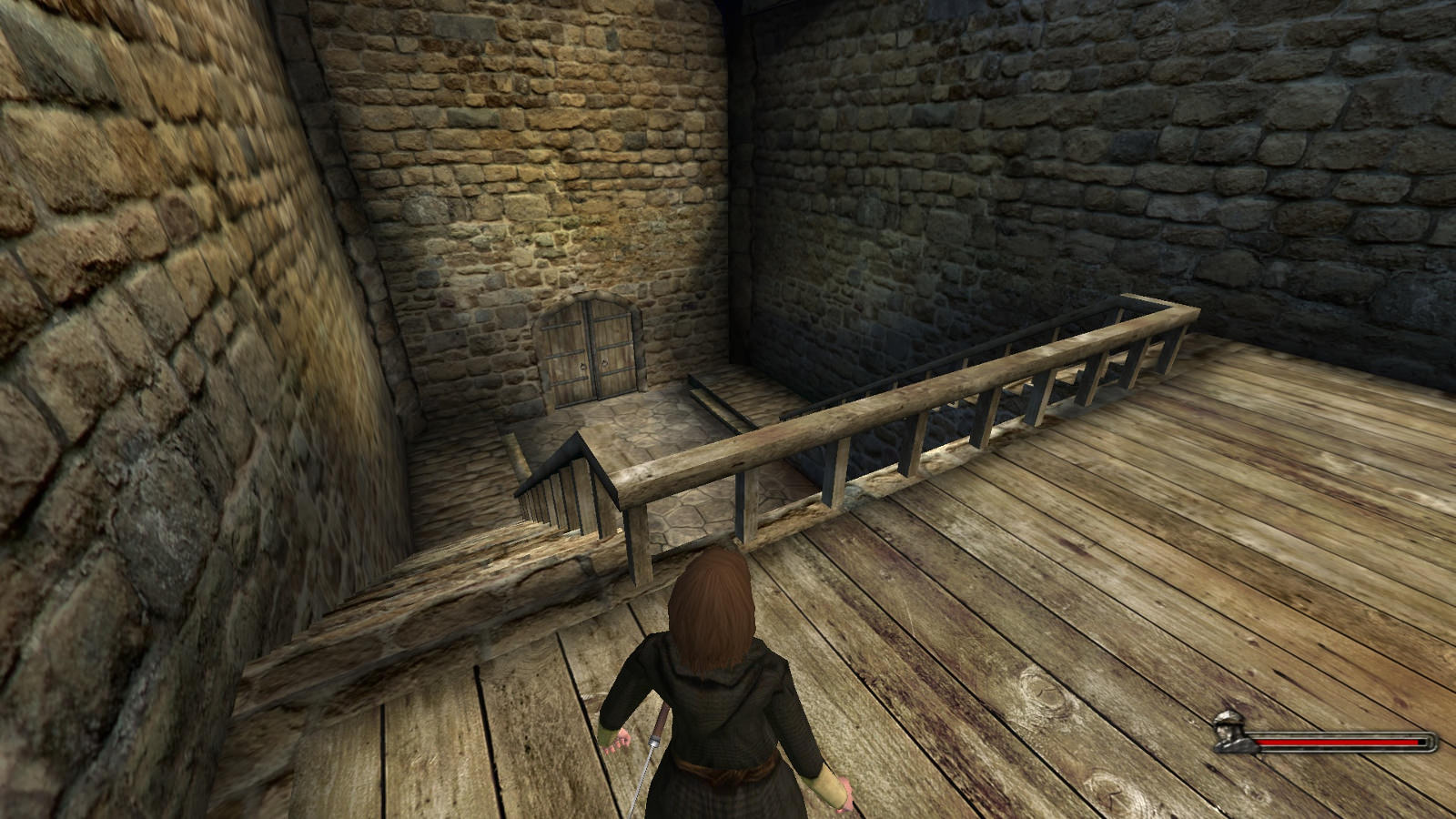 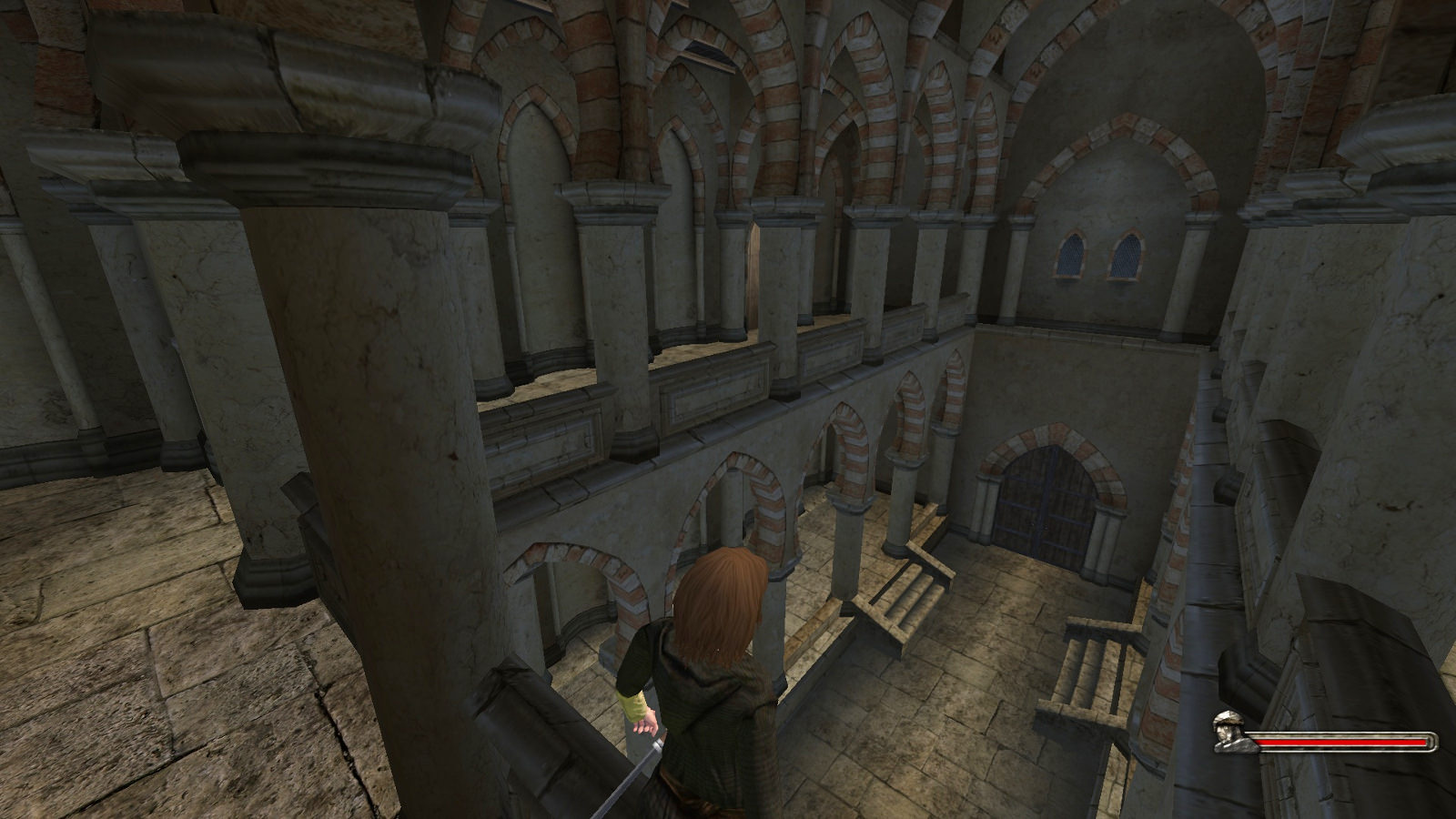 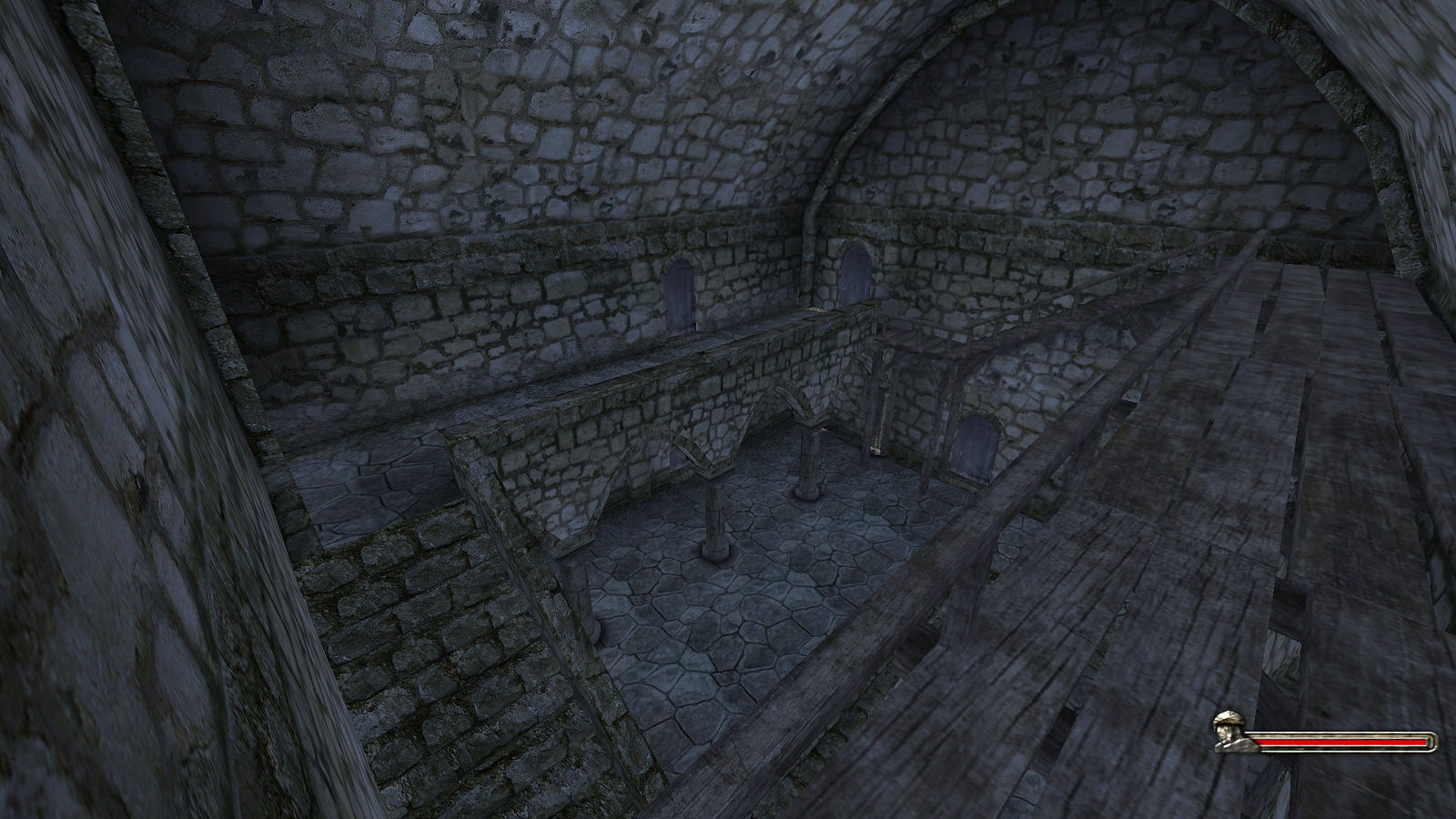 I really do like the original idea, so I've written a code needed for module system to display all of them in Warband map editor. It was quite successful; meaning that the map editor now displays the originally unavailable props (+80 in total), which can be added into multiplayer maps, those maps can be saved, loaded, transfered between installations, collisions work, etc. 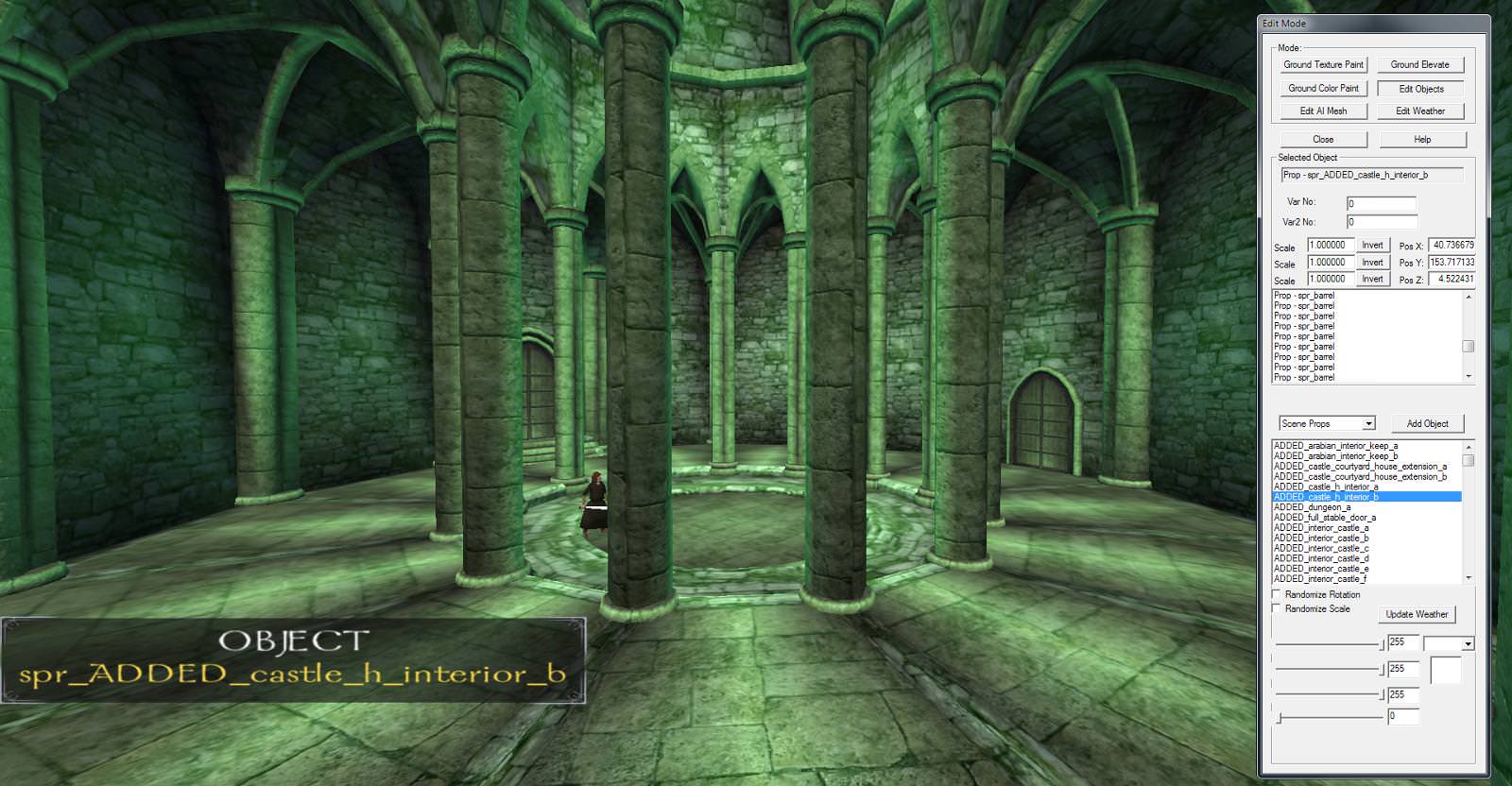 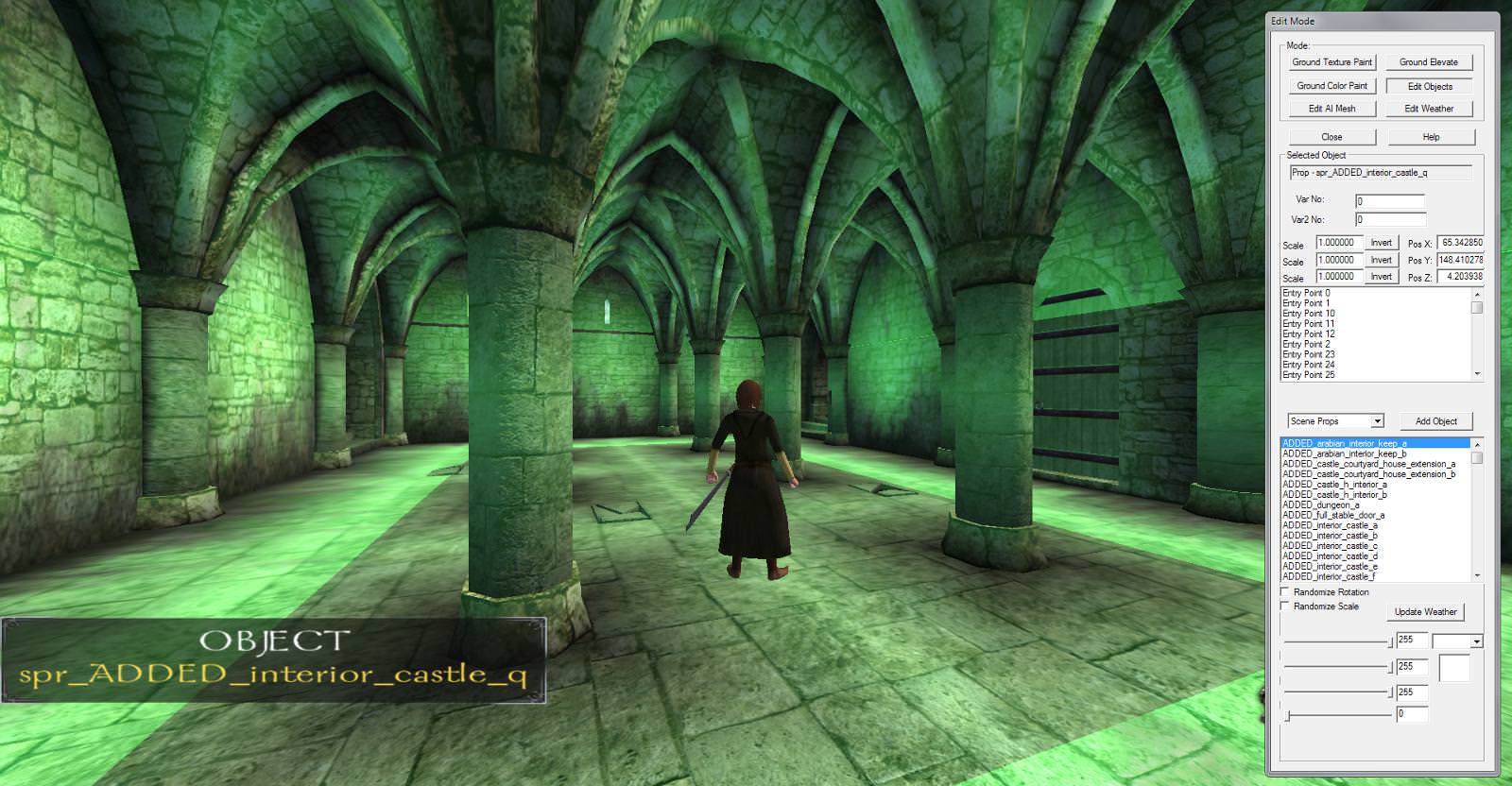 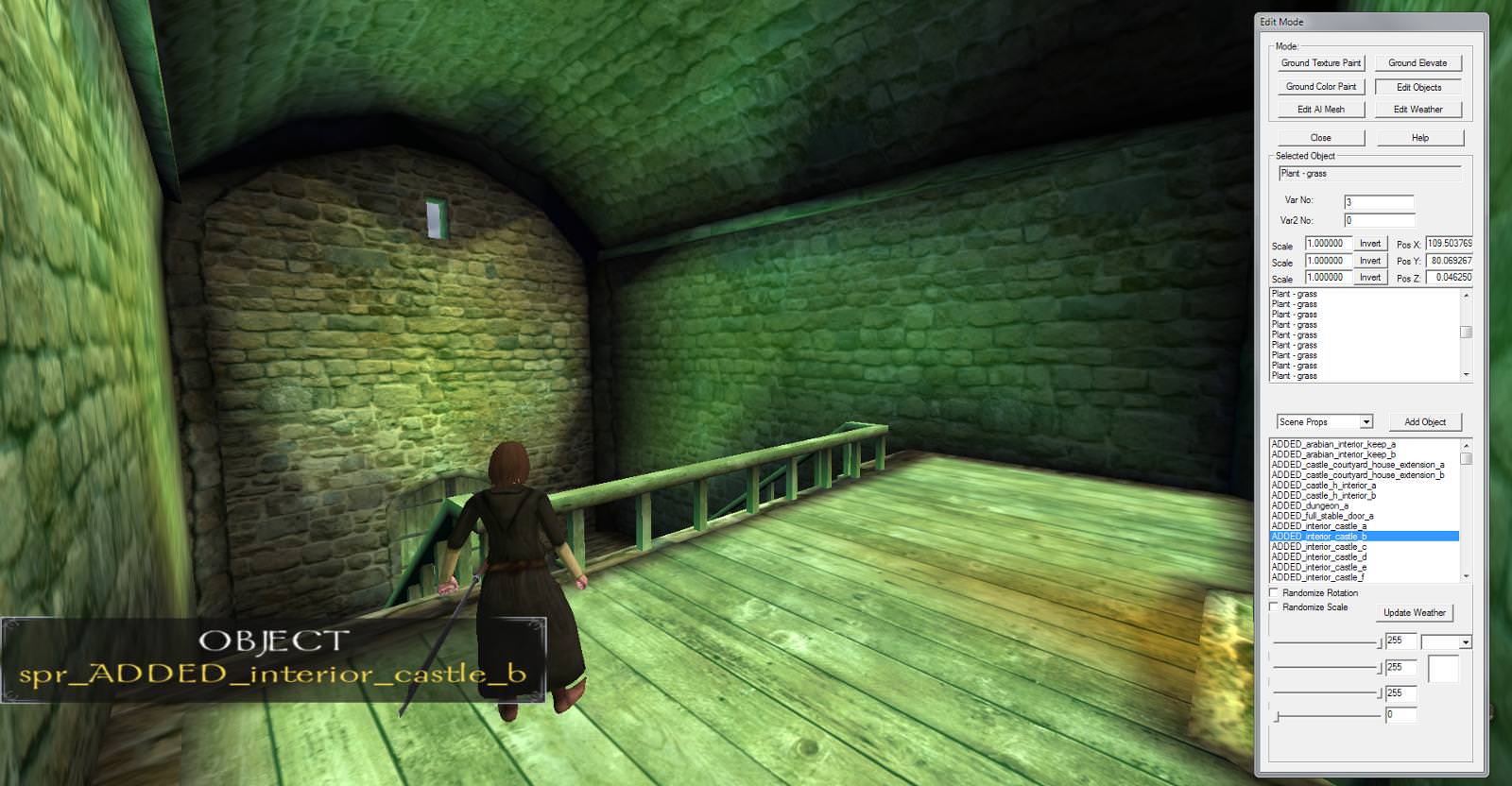 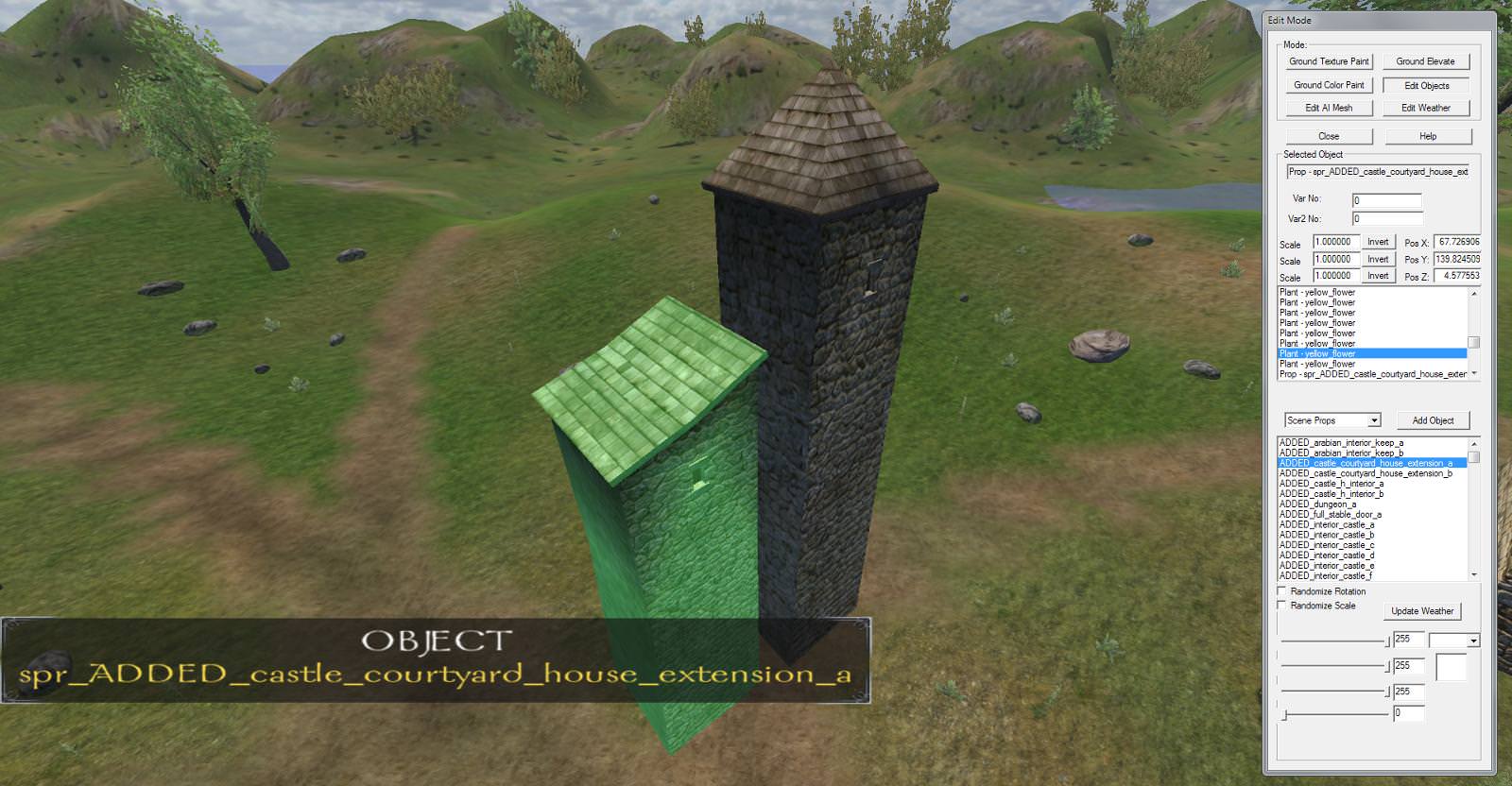 The question is the native-compatibility. Can those additional props really be utilized in a native-compatible kind of way as it has been partially mentioned? I mean, I'm not sure I've heard about possibility to fully use any prop without its scene prop ID name being initialized. I've tried couple of ways (check the additional info in spoiler), but neither of them worked completely. If you try to load a map with those additional props using the Vanilla Native (tested on localhost), you just aren't able to see them; Warband simply skips them and loads the first available prop on the list, which is often that pink question_mark, which is the first one. The game didn't crash, though. The behavior was quite standard and similar to when you try to load a new prop with scene prop ID name missing or a prop from .brf file that isn't initiated.

So, maybe, if someone has an idea (observation, experience, etc) on how to add them into the maps without loosing the native-compatibilityâḊ Currently, only players with modified modules (Native+ or NeoGK+) would be able to see them, which is unfortunate. Some of the props are pretty nice andâconsidering that they are quite large in scale; therefore, not only suitable for underground corridors but also for bigger structuresâthey could become a great addition (and differentiation) to the multiplayer maps played on this server.