69 replies to this topic

@Lenna, unfortunately it isn't so easy. Some maps with 140+ players and nords or swadia defending are quite impossible to win for attackers. And we can't balance a map thinking to 120+ players or it becomes too easy with 70-80 players.
The edit you made to that map is bad because ruins the cavalry fight inside. That map is easy to defend if players defend the gatehouse. Players don't do teamwork and they don't focus on importat targets. This is really bad, specially on bannerlord. Imagine on bannerlord players don't use balistas to destroy the siege ram like on vesin, gates falling in few minutes and the maps become a deadmatch around flag all the times. I hope taleworlds considered these things.

We have quite some maps left that are not in the rotation because they are not balanced with certain amount of people. Can we maybe edit the map list with a script which throws maps out of the rotation if there are too many or not enough players? If it is possible you could make a script which randomizes the map list everytime it ends or after it has finished 2-4 times.

If this is not possible in warband I want to make it in Bannerlord a thing as this makes the server more variated and the possibilities for way more maps.

@KingArthur The edit I made and posted in previous post was just a joke in order to relief the post itself a bit, it never meant to be a serious edit. C'mon, putting six launchers basically into a circle and surround the flag with them completely is totally insane; I thought this was clear from the screenshots themselves without the necessity to add some subsequent smileys. Therefore: "Or rather something else…"

I never said the situation is easy since all my thoughts were rather general, no simple or definite solution was mentioned. We don't have a disagreement on a particular level. I can sign all you wrote about not defending the important targets, not utilizing all the possibilities the maps offer, opening doors resulting in a loss of a team and so on. This isn't what my original post was about.

My thoughts and wishes were rather fundamental. Simply put, do not put everything on a pedestal of a desire to achieve a perfect balance since it's not an automatic guarantee of anything, please. Some people from staff have said it themselves in previous topics, your server isn't a competitive one. Obeying rules and having fun are probably two the most important rules, even though they may be dichotomous for some people. I find swapping players to be the most problematic solution to unbalance probably because it may ruin the fun from the game for some players for the reasons I have stated. This stands (to some extent) also for the limited lives solution since some not very skilled players or newcomers are being potentially condemned to wait in idleness for a certain period of time because they spend their lives too fast, thus they (or the skilled one, it doesn't matter in the end) are being punished by some external entity for their disability to survive. I don't have a problem to stand on my feet until the round ends, some players may have. Both solutions may improve the map balance but for a certain price—not a small one, in my opinion. Therefore, I wouldn't vote for them personally; that is what I mentioned in previous post.

Bearing all this in mind, when it comes to fixing the balance, I would vote for more general and traditional way like the map editing and so on since there is always only one and the same map for all the players. Yes, the initial position may vary at the beginning, but the conditions remain the same through all the rounds. All the players are able to play until the round ends, almost everyone is able to choose the preferred side at the beginning of a round. I understand that it is hard/impossible to balance a map for such a wide range of players like 0–200, but you can do this at least approximately. When it comes to differences between factions, this is where the malus system comes in handy.

The different initial amount of players on each side at the beginning of a map solution—like e.g. @White_Potato suggests—could be a good great solution, problem is that the players are not homogeneous entities, their skills differ, the rosters vary from map to map—deploying some long-term data and updating the conditions according to them on a regular basis would seem to be an obligatory option for this solution. This isn't a thing you do with Python within a hour.

As I stated, it's your server, hence the decision is yours. Just, please, do not put everything on a pedestal of a desire to achieve a perfect balance.

Why on Earth are all my posts that long…

Things like change rotation based on player number or change the max players for each team can't be done, or better, can't be done easly. If nobody did it until now, there's a reason.

Things like change rotation based on player number or change the max players for each team can't be done, or better, can't be done easly. If nobody did it until now, there's a reason.

No, you can't achieve perfect balance and it may somewhat be because of the way players play, like players not thinking of achieving certain objectives or relying on teamwork to win the rounds/map or players doing foolish actions such as not covering various attacker entry points, not using or being capable of using the siege weapons or doing foolish things like leaving doors open (It seems like every other map I play, either me, Lenna or Draco The Dragon are shouting in chat to keep watch on the flag, put down ladders or keep doors closed!). On the attacking side of things: players only using one ladder to gain entry rather than other ladders or entrances etc. Along with what Lenna was saying about players maybe being dissatisfied with being forced to play defender could very well be because of the longer spawn time; and if that's adjusted to be appealing to play as defender could be an option, but I'm almost sure would be kind of a overall balancing mess. Saluti!

You didn't tell me the same when you attended my last saturday night show and you "scored" my big corporal "marks" amongst the public, granuja. Not 100% accurate due to steam sale, as the amount of noobs is higher than normal right now. 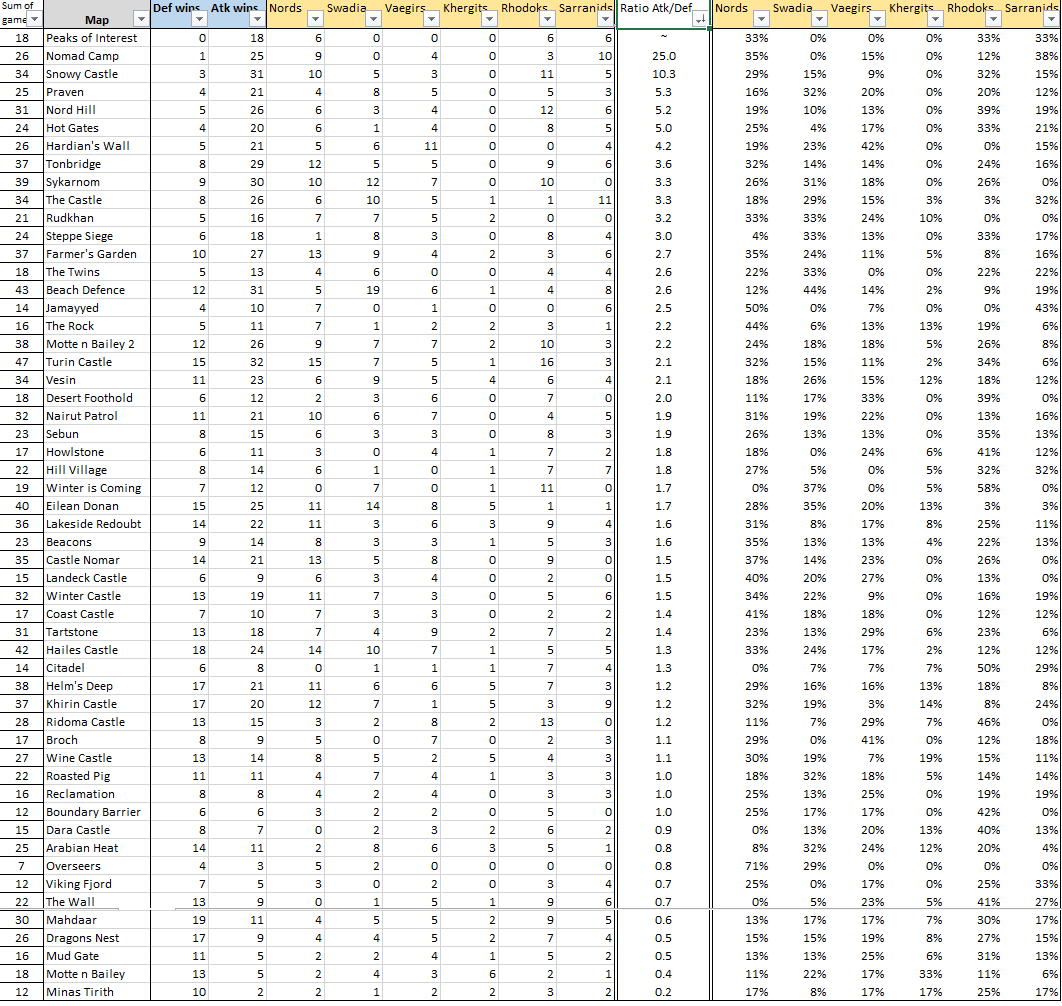 Summary of the total data (2 screens in total):

No, i dont have an access to this statistics page so i have to rewrite it manually from KingArthur's  jpg.

[Troll mode Off] I was thinking that is inevitable that some maps are more favourable to attackers or defenders, perfect balance is impossible indeed, but something is failing here... I find interesting at least a bit of handicap or challenge in that way for the faction that has the less favourable tactical position but curiously that handicap is usually on the defenders side, so how to fix the fact that in long term statistically the attacker faction wins many more rounds than the defender faction? Maybe a simple modification like increasing the time needed to raise up the defender's flag could equalise a bit that unbalanced ratio... why not? Think about it.

On the other hand it would be nice to establish a maximum range of acceptable 'Atk/Def Ratio' in long term (something like 3.0 or a bit less) and therefore those maps that exceed that range after hundreds of rounds as sample would be susceptible to be modified.

@Potato, can you import json data in excel ?

yes u can send  me json files

Maybe the respawn time should be set lower for the defending team.

how to fix the fact that in long term statistically the attacker faction wins many more rounds than the defender faction?

Maybe the respawn time should be set lower for the defending team.

Hmm, respawn time for defenders can't be changed, but time for attackers can be increased a little bit (from 3 seconds to 5 or 6 by ex.)... maybe this can balance a little bit for most of maps.

Attackers and defenders respawn time are connected. If you increase attackers time defenders one is rised too.

Oh well, ok guys, it was just a thought. Thanks for the reply. Saluti!

My humble opinion: Modifying the respawn time wouldn't be a bad idea but i find it a bit too much "elaborate" if you allow me the expression, anyway as KingArthur said that's not possible because both times are connected, and if it was possible...i know what many players would think: "So the attacker team has to wait more after being killed? That's unfair!"

Of course everyone defends their ideas and usually everyone thinks their ideas are better, but i sincerely think that my idea of increasing the time for the attackers to rise up the defenders flag is not a crazy idea (if it's even possible to do that), maybe increasing it a 20% or 25%, not a drastic change...me at least i find it a suitable solution to equalise the balance, i would be glad if some admins gave me their opinion about this.


These are the last stats i post. I don't think it's necessary to post every week.
From the stats we can see most of maps are balanced and again the main problem are the weak factions like khergists (which were played few in last week) and sarranids, and how the maps are played.

Also tagged with one or more of these keywords: mountandsiege, maps, statistics